A common soldier possibly the hollows/dreglings of Dark Souls 2. They seem to be capable of faking being corpses to gain an element of surprise and are very aggressive. They wield various weapons such as halberds and swords. The Soldiers wear armor and helmets which slightly resemble the Paladin Set from Dark Souls.

Clubmen
The Clubmen are poorly clothed undead creatures that are normally very slow moving until they are up close, at close ranges they become more aggressive and attack wildly. It is difficult to simply turtle against them since they may release a flurry designed to break guards. As well after hitting one's shield this enemy has a very short recoil animation meaning they can stop stamina from recharging in between swings. It is a good idea to deal with these enemies quickly and especially in small numbers. When backed against a ledge they will do their charge attack which is designed to break guard.

A fast moving dog that deals little damage and little poise damage. While weak it is fast moving and capable of stun-locking and dodging the player's attacks.

There are enemies that sort of resemble the shape of turtles wearing armor which may simply shape their bo dies that way. They are slow moving generally but hit hard. Attacking from behind will prompt them to fall backwards onto the player knocking the player to the ground. Their attacks can be blocked. Supposedly they are called Tortoise. It would seem that when the player has their back to this enemy's front they may do a special attack upon the player to do a sort of execution.

There appear to be large black lizard creatures in game though how exactly they fight has yet to be seen. The sides of their heads have spikes as well their tails resemble maces so it is likely they will attack with both their head and tail. When opening their mouths it is revealed they have long tongues possibly hinting at an ability to whip the player with them.

The undead rogues are figures that wear dark trousers and brown clothing with a hood. Most dual wield fast small weapons while some carry small ranged weapons that fire either arrows or bolts.

Skeletons are enemies made of bones that carry a shield and sword. They are fast moving and take very little damage from normal physical attacks that aren't from a strike damage weapon. It is best to use strike weapons or magic against them.

There seem to be Victims which look to be in bad health that wander the Torture Chamber in darkness. The Silver Chariot will ride over them as he chases the player though their deaths don't seem to send the souls to the player, if they give off souls. They seem to move very slowly and are likely only there to slow the player down. The armor they wear is made of chain mail and slightly resembles Cleric armor.

The Troll is a fat stocky creature which so far throws axes. It seems to have great precision and is capable of scoring a head-shot on the player for critical damage. It would also appear that with larger weapons the Axes can be deflected as they are thrown towards the player.

Within the Mansion of Dragons there appears to be at least one Giant Rat Abomination hidden within a cell. While initially it will not attack it is possible to provoke with a projectile such as an arrow. Upon being hit it will grow angry then destroy the wall between itself and the player. Its attacks have a lot of wind up but look to have a strong knock-back.

Waist high boars that seem to be designed around swarm tactics and rushing the player. They are capable of stun-locking though they deal somewhat weak damage and look to deal low poise damage.

Within the Mansion of the Dragons is a large Skeletal Dragon which will be embedded into the level. At first it will appear to be dead but upon picking up the item in front of it the creature will slowly rise. Next the dragon will open its mouth and let out a roar before launching its head and throat at the player. This attack is fairly quick and deals a great deal of damage though doing it kills the dragon. The Skeleton Dragon is more of a living trap.


The Necromancer/Sorcerer has the ability to make statues alive. The only example known so far are the Horse Knights Statues. when activated, they have glowing red eyes. They wear heavy armor and a helmet resembling the head of a horse. Their weapon looks like two blades which handles are attached to each other. Even though the gear looks heavy, they are still really agile. They attack with combo's which involve turns, jumps and kicks.

Located past a wooden bridge near the entrance to the Undead Purgatory, this is a powerful enemy that is quite peaceful. It will not rush off to attack the player and will only turn aggressive when one comes very close to this foe. It appears to wear armor similar to the Undead Warrior from the trailers, its armor though is much heavier. For whatever reason it isn't staggered by one ultra greatsword swing meaning it must have a great deal of poise. The phantom wields a massive ultra greatsword and a tower shield which it can slam into the ground. This will stagger enemies in close proximity and knock them to the ground. In combat the foe will move slowly normally baiting the use of healing items which when used will prompt it to rush the player with heavy blows. It is capable of learning how the player fights and reacting accordingly with different attacks and is not an easy enemy to face alone.

*Unless specified, all enemy names are unofficial placeholders based on conjecture* 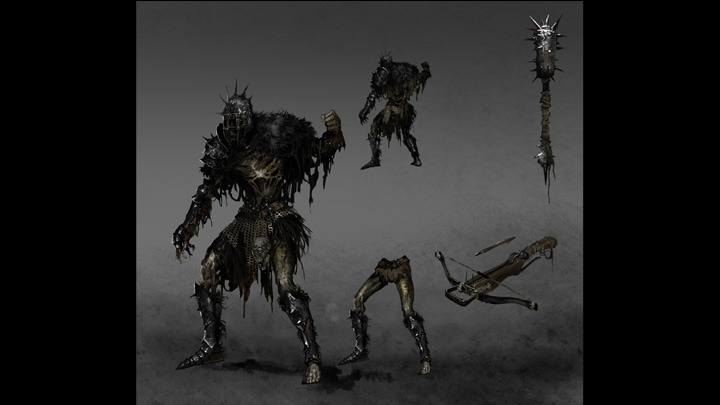 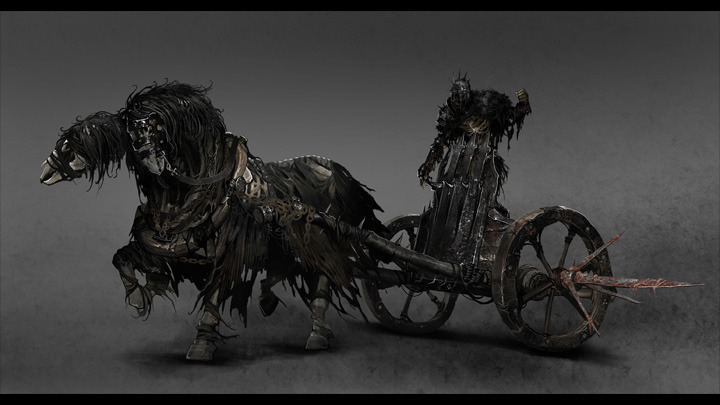 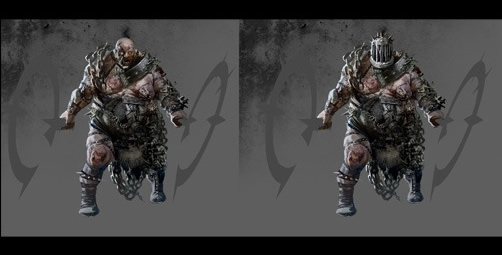 The Sickle Wielder is a pretty powerful enemy that is difficult to turtle against. It is slow walking but may charge, when charging its first attack is designed to break a person's guard with a follow up quick swipe. With this in mind it seems that dodging is far more important than blocking when it comes to this enemy, mobility in general is handy since it can be backstabbed. 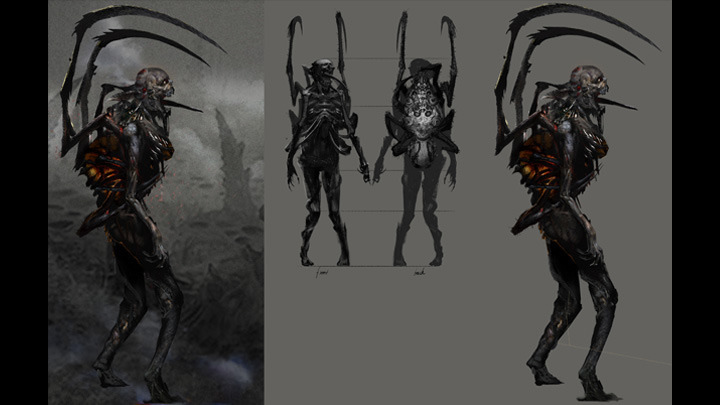 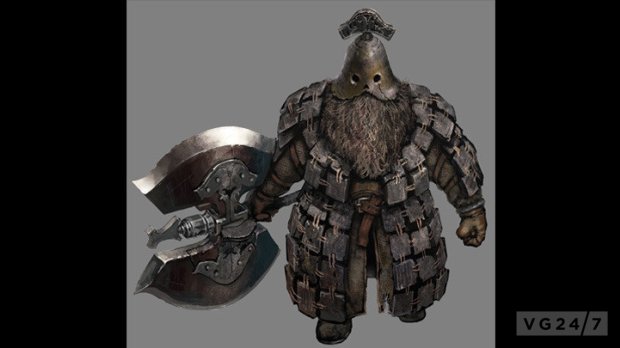 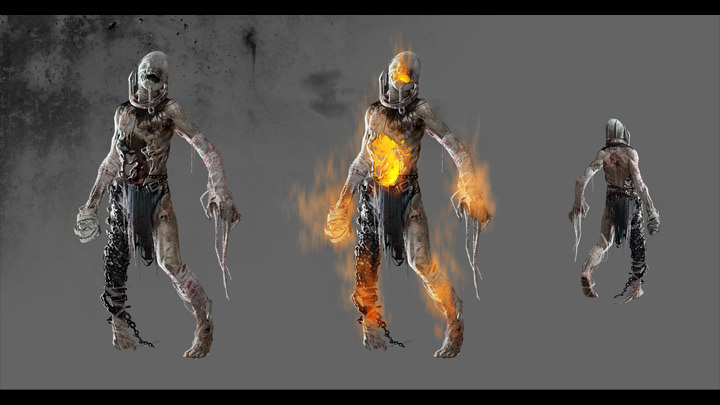 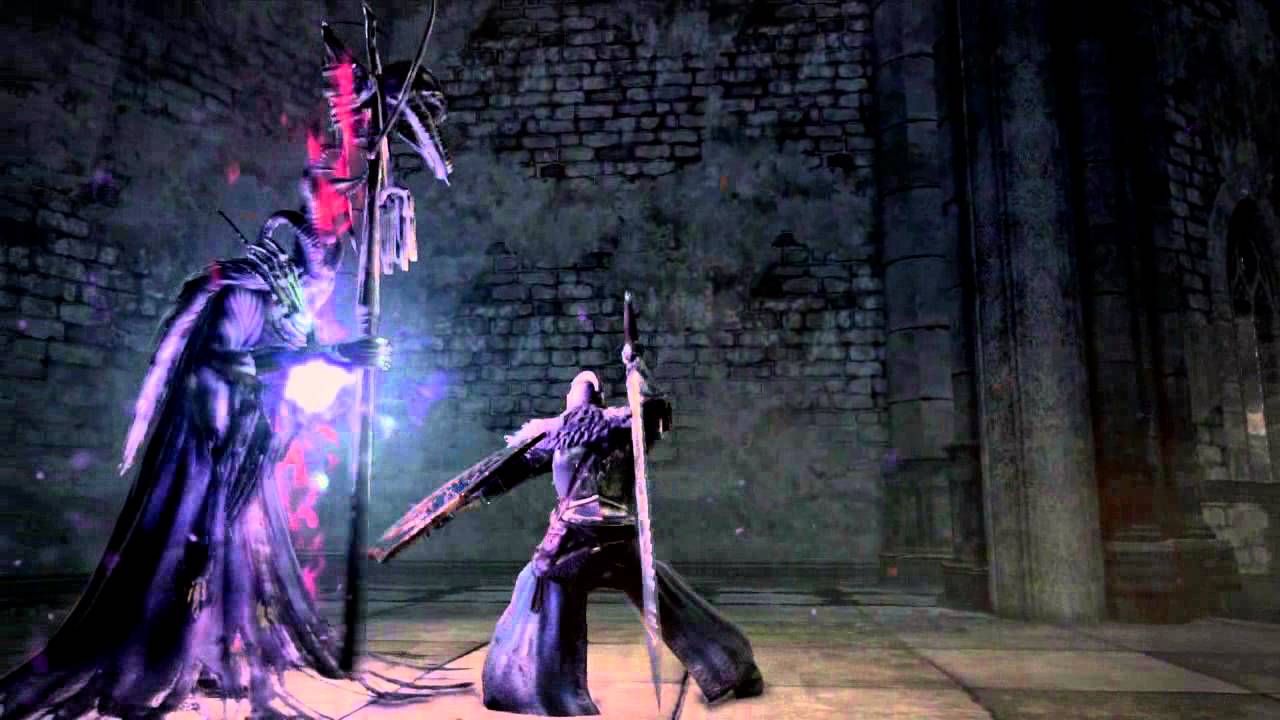