Magic and Miracles
Spells will be making a return in Dark Souls 2, though they have been changed a good amount since Dark Souls.

When casting a spell in Dark Soul 2, you can cast a light and a heavy version of spell. The heavier version of the spell deals more damage and sometimes has increased range, but, it takes longer to cast. Also, when two-handing a catalyst, the spell is even further strengthened and can be aimed by pressing L1/LB.hahahaahahahah 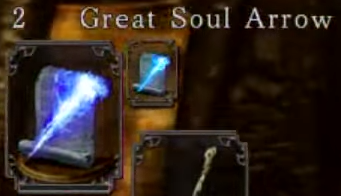 In addition to the new spell level system, the spell hotbar will show the next spell in the players' queue at the top-right of the currently equipped spell.

‍‍‍‍Magic in this game comes in four flavors:

To use any kind of Magic, the player will first have to learn a spell, and equip a Catalyst that corresponds to the spell's Magic class. After the spell is learned, it must be equipped at a Bonfire with the Attune Magic option.

A spell has a set amount of uses, before it is depleted, but resting at a Bonfire will fully replenish it. Some spells can be equipped more than once, if the player has enough slots, and multiple copies of the spell in question.

Miracles are also affected by an online feature called "Resonance". If a player uses a miracle in their world (for example, "Wrath of the Gods"), other players connected to the same network will see a resonance marker in the area where you cast that miracle. If they then use the same miracle in that area then the power of their miracle will be increased. You'll know what spell to cast to enable the resonance by scrolling through your attuned spells and look for a spell that has a ring around it, similar to the resonance marker that appears in the world.

Pyromancy is a simplistic form of magic which, unlike Sorcery or Miracles, does not demand investment in stats to make full use of. It makes use of only one Catalyst, the Pyromancy Flame, and neither it nor the spells it utilises have any stat restrictions. Anyone can benefit from Pyromancy providing they have at least some Attunement, making it a popular addition to most playstyles.
The damage of pyromancies is determined by the spell and the power of the Pyromancy Flame, which can be upgraded and ascended to provide a greater output of damage. It is worth noting that although the Pyromancy Flame's stats seem to imply that it scales from Intelligence, this only applies to the damage dealt by its physical fist attack. Although Intelligence does not affect pyromancies spells directly, Pyromancies are still classed as Sorcery, and as such will benefit from the damage modifiers of items such as the xxxxx